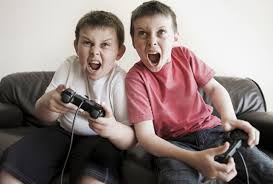 On a sundrenched Monday afternoon in 1986, my brother and I jumped off the school bus, sprinted past our bikes and skateboards in the driveway, and burst through the side door of the house. Shedding our shoes and schoolbags mid-sprint, we ricocheted off one another as we climbed the stairs, two at a time, in hopes of grabbing the little gray joystick first. Super Mario Brothers was our favorite game. We’ll save you, Princess Toadstool! But that Monday, the miniature mustachioed men and their magic mushrooms were missing. After searching the house with the fervor of dope starved junkies, my brother and I stared at each other in disbelief. We screamed in unison when realized what happened. “Mom! Where did you put the Nintendo?

“It’s gone,” she replied without a smidgeon of remorse. “It’s not even in the house so you can stop looking. Go outside and play!”

We hated her for taking our beloved game, but thirty years later, as I watch my two tiny tech-junkies glued to our TV, I understand why she did it. Too much screen time turns children from delightful, creative cherubs into grouchy, demanding trolls. A quick Google search will display dozens of articles linking video games and problem behavior. Several studies indicate a correlation with ADHD. Quick, throw out the X-Box.

of videogaming. One oft-cited study conducted in 2013 purports an increase in players’ visual spatial abilities, planning, and fine motor skills. There are games that promise to make you smarter by improving your memory and enhancing your reasoning skills. There are even games to cure your ADHD. Smarter, faster, nimbler! Quick, pull that X-Box out of the trash.

But here’s the rub. As it turns out, video games don’t make you smarter. Shocking, I know. For the last two years researchers have been replicating the 2013 study purporting intellectual increases from video games. They haven’t been able to generate the same results. Gamers do improve at individual video games, but the skills acquired don’t generalize to other activities – test performance, homework completion, reading rate – as the games developers would have you believe. A recent study at Georgia Tech reviewed the games designed to help kids with ADHD and concluded, “The claims made are largely unsubstantiated.”

You can find research to support either position, but common sense suggests interacting with real live humans, climbing trees, and creating art projects are healthier options than staring at a computer screen until your eyes bleed. You don’t need a medical journal to tell you that playing Grand Theft Auto won’t make get your six-year-old into Mensa. Neither will it turn him into a serial killer.

Here’s the simple truth. Video games will make you a better parent.

They are the ultimate carrot. “You want to play Just Dance? Sure. But first you need to finish your homework.” You’ll never see a kid complete long division with more passion.

Video games dry up tears (mostly yours) and stop stewardess’ sneers. Ever fly cross-country with two screaming children? I guarantee you’ll be downloading Angry Birds: Star Wars Edition before the plane lifts off the tarmac.

Video games are just plain fun. They are action-packed candy for the brain. Be honest. How many hours have you wasted spent crushing candy, cultivating farmland, and chasing that elusive yellow creature with the pointy ears? I’ll bet my personalized backpack full of Pokétools the figure is larger than you’d care to admit.

While I try to limit my kids’ time on their Wii, I’m ever so grateful for it when I need to get things done. At this very moment, my six-year-old is enjoying the sweet sounds of Fantasia so that I might type these words. Excellent parenting. My mom was right to hide our beloved Nintendo thirty years ago, but she’s in for a shock this Christmas. NES is releasing a miniature version of the original entertainment system, and I’ve preordered one for my brother’s stocking. We’re coming to save you, Princess Toadstool! Click on this link and you can order yours, too.

2 thoughts on “Can Video Games Get Your Kid into Mensa?”